Where souls brimful of love abide and meet;

Watch the slow door That opening,

letting in, lets out no more.

It’s Sunday and, here, I am with another summer Sunday featured article to juice up your lackluster summer mood in this lovely early morning. It is this skillful mixture of simple love-hate mingled elegance and playful youth cheerfulness that has ascertained that this yakuza action manga Sousei Yuugi by Atsushi Okada has become such a hot topic that it climbs to the top of the overall ranking at an exceptional speed on the Yanmaga WEB.

To briefly introduce the story, the Nunobukuro-gumi, the largest gangster organization in the Kansai region, is divided into two groups depending on whether the son of Chihiro Kaneko, the twin Rin or the Rui, takes over as the next leader of the organization. Rin, the older brother, the black hair gentleman, and the leader of the Kurosakura-gumi values ​​tradition and aims for the so-called stubborn gangsters’ yakuza life under politically highly complex circumstances to settle for a time frame for the reform of the organization.

He often speaks politely and has this nervous expression on his face. On the other hand, Rui, the younger brother, the white hair youngster, and the leader of the Shiratan-gumi has a daring but irresponsible approach, and a uniquely independent flavor. He values innovation and aims to contribute to the furthering of common objectives such as strengthening representative and individual freedom in a way that he wants to break the contrarian settings of society to create a whole new one. He often speaks in the Kansai dialect and has a generous expression on his face.

In a word, they are like the two hearts on the reverse side of the medal. Whenever they meet with each other it always ends up with a flesh-and-bone battle. Moreover, because the twins can read each other’s minds and understand each other’s horizon of thought too much, their abilities are always in competition, but in contrast, there is an outrageous secret.

Even though they are always fighting to eliminate another self that threatens each other’s existence, at the same time they are attracted to each other and love each other. In fact, at the end of the first chapter, the two of them kiss each other.

In other words, the Sousei Yuugi is not just a usual action yakuza title, but the twin BL developments are also a sight worth seeing.

I too had the impression that it’s a common manga, but it’s a bit complicated. Last week when Ayame and I were talking about recent jump titles she asked me “You still haven’t read Sousei Yuugi ?! you definitely need to check it out, it’s awesome.” I was like okay fine I know the name, I already put up a piece of news about the release of the manga, and now you giving me the recommendation. Let’s see.

Now here we are. She tricked me. I was betrayed brilliantly. But you know what!! I’ll forgive her. Cause the art is amazing and the story is fun. It really blends in harmoniously with the heritage cityscape and is always characterized by mysterious and bizarre themes and characters in all of its chapters. Especially Shioda and the reporter.

At the beginning of the series, there is a part where a person named Shioda who newly joined the organization, comes to the front light. According to the storyline he will be entrusted as a witness and judge to choose the next suitable candidate between those two for the next president. Is he good ?! Is he bad?!

That hasn’t been revealed yet but one thing is for sure he has no prejudice in a good way because he doesn’t know a thing about the world of yakuza. So he started investigating from both sides. In the process, he faces various problems, but Shioda also has a crush on the idea of ​​stepping into the underworld in order to turn around Sato, a freelance female writer.

Often, love and hate are said to be a single piece of paper, and this twin game is exactly the manga that goes on the ground. But even if I say so,13 chapters have already been serialized, and I still have no idea what the author has penned for the future arcs. One thing I can say is that personally, I think that the character Shioda is more interesting than the top candidate for the next Nunobukuro group of handsome men.

To me, he seemed like a much more accommodating and charming fellow with a hard exterior and soft heart. He has a lot of interest in Sato, so I expect that Sato will be involved in the future story and I would like to pay attention to the part where a relationship between Shioda and Sato gets a turn.

I also expect that other men from both sides of the group will be involved in the story in the future, and the truth of the corruption and the mystery will be revealed, but it seems that things are not so simple. Not only the handsome Rui and Rin, but also unique characters such as the current team leader who is also his father, and the old man in charge of their education have appeared and started to be involved in the story. So I’m quite interested. So let’s see where it goes.

And now finally last but not least I know some of you will still ask me. What about the BL? Are you gonna ignore the fact? Well not really. The kissing scene at the end of the first chapter; it was quite heavy for me too, but considering that it is serialized in Yanmaga, I am placing my bet higher and expecting an even more intense play to unfold.

With this, I rest my case here. Read the manga, form an opinion of your own, find out which aspects hits you hard the most and continue if you like, but most importantly do not forget to let us know your thoughts in the comments as well. 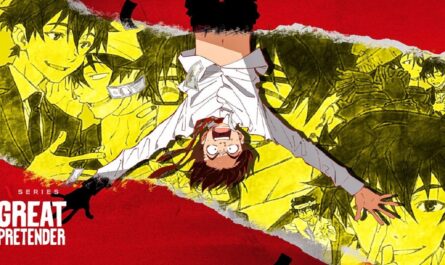