Jun Watanabe‘s latest action seinen drama manga Golden Guy will end its 1st story part in the upcoming Weekly Manga Goraku issue on Oct 8, 2021. The second part of the story will start next year in Spring.

Born on December 10, 1968, in Machida, Tokyo, Jun Watanabe is famous for writing in Kodansha. He created the acclaimed manga RRR (Rock ‘n’ Roll Ricky) which was serialized in Weekly Young Magazine from January 29, 2007, to August 24, 2009 issue. He is also known for the series Degausser, Emblem Take 2, Montage, and more. Watanabe launched the manga Golden Guy in Nihon Bungeisha‘s Weekly Manga Goraku issue on April 24, 2020, and as of October 2021, 4 volumes have been published.

Nihon Bungeisha describes the story as:

The 39-year-old Kai Sakurai is the leader of the Daibutsu, a small and poor clan of gangsters who belongs to the Kamezuru family, a gangster organization based in Yokohama. The story follows the events of the aforementioned clan, which came into conflict with a long-standing ally.

With these we end our weekly update of news. Stay tuned with us for more such manga and anime related news in future. 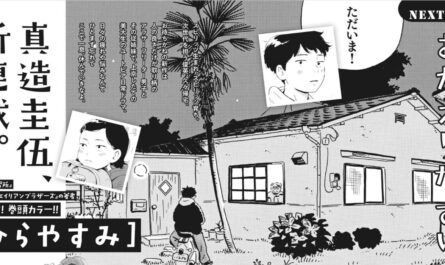