For a person who more or less runs away from Yaoi or BL, Given felt like a different eye-opening series that beautifully captured the isolating nature of musical drama through a beautifully organized direction and plot. It’s a deconstructed BL masterpiece that both casual otakus and Fujoshis are satisfied with.

In September 2019 the manga got adapted as anime by Studio Lerche which aired from July 11 to September 19, 2019. Later A film sequel to the original anime started premiering in Japan on August 22, 2020.

To commemorate the film’s first anniversary, I thought let’s do something interesting that people can enjoy. So here’s a short handy guide to some Given facts that you may not be aware of.

1. Given is the first Boy’s Love work to be featured on Noitamina

Given made history as the first-ever BL(yaoi) anime to air on Noitamina Fuji TV‘s anime programming block. For those who aren’t familiar with the term Noitamina, it is the highest-rated late-night broadcast frame in Japan that is solely dedicated to anime content. It is famous for titles like Honey and Clover, Nodame Cantabile, Paradise Kiss, Mononoke, The Tatami Galaxy, Shiki, Tokyo Magnitude 8.0, Anohana, Usagi Drop, Guilty Crown, Katanagatari, Psycho Pass, Your Lie in April, Wotakoi, The Promised Neverland and many more high profile series and films.

Fun fact, If you spell “Noitamina” backward it turns out to be “Animation.” In short, it’s a reverse reading of the word “Animation”.

2. There are many references to other Alternative rock songs in the episode titles

Almost all of the episode titles (only exception is episode nine which is titled after Fuyu no Hanashi an original song performed by Mafyuu in the episode) in the series featured references to the British-American rocks songs. For example, the first episode title ”Boys in the Band” is a reference to the song Boys in the Band, popularized by English indie rock band The Libertines in 2004. Episode two is titled after the song Like Someone in Love covered by Bruno Major, originally a popular song composed in 1944 by the famous Jimmy Van Heusen.

Episode 5: The Reason by Hoobastank.

Episode 7: Tumbling Dice by Linda Ronstadt (originally by the legendary The Rolling Stones, written by Mick Jagger and Keith Richards).

Episode 8: Time Is Running Out is a song by Muse.

Episode 10: Wonderwall is a song by Oasis.

To make things easier, here’s a complete Spotify playlist for you to stream, made up of all the tracks mentioned above.

3. They were known as “The Seasons” in past.

In the series, the band has given it the name “Given”, in tribute to the guitar given by Yuki’s mother to Mafuyu.

But before Mafuyu joined the band, they used to go by the name “The Seasons” as Haruki, Akihiko, and Ritsuka all of their name have season in them. For instance in Japanese 春 (Haru) means “spring”, 秋 (Aki) translates to “autumn” and 立夏 (rikka) denotes “beginning of summer”.

4. Author was a famous doujin artist

Before Natsuki sensei came to the mainstream media with the manga “Given” in Shinshokan’s monthly BL manga magazine Chéri+ in April 2013, she used to work as a doujin artist.

Her original name Natsuki Kizu might not ring a bell immediately but Shiki/Fuyu, Usotsuki no Shita de, Tonari no Fukanou to Koufuku, Kono Machi ni Sunderu Karera no Koto, Heichou no Onaka, Gunjou no Shashin, Ano Machi ni Sunderu Karera no Koto are famous names which certainly will ring a bell in the ears of distinguished doujin specialists. In the underground BL community, she is known as the famous Gusari of Haikyuu!!. She’s the one responsible for most of the well-known BL doujins on Hetalia, Haikyuu, AOT, and Kuroko no Basuke, and more.

Even though they are all in the same band, they all listen to different kinds of music.

Ritsuka, his favorite musical styles on the electric guitar are for sure Alternative/Funk and Rock. Haruki listens to light pop music or Japanese rock music as well as cheerful dance music with a slow tempo. Akihiko loves extreme genres like heavy rock, metal, melodic hardcore, emotional, scream, alternative, trip-hop. He is also good with classical music as well. Finally, as for Mafuyu he is not all that picky about music and all and listens to any music recommended by his bandmates.

6. Akihiko can do anything

Akihiko is a bit of a “jack of all trades” in the show. First of all, he is a major in music. He usually plays drums for the band but can also play guitar and bass as well. In the classical world, he has made a name for himself as a famous violinist

Other than music, he used to do Karate when he was young and now he works as a security guard from time to time. He is also involved in doing various part-time jobs like doing works at a convenience store or being a waiter in a private event and all.

7. Haruki is the founder/leader as well as the oldest member of the band

It was Haruki who gathered together Akihiko and Ritsuka and set up the formation of the band in the first place.

Although they all came from a totally different musical direction and have different tastes in music, they formed the band “The Seasons” as a guitar, bass, and drums-driven instrumental rock combo which had almost nothing in common but still rocked hard in the region.

“Tightly clutching his Gibson guitar, Mafuyu Sato steps out of his dark apartment to begin another day of his high school life.”

With this I fnish my list of 8 cool facts that you might not have known about Given. If you have also watched Given and think that I mised out on something, feel free to comment down below. I always read and try to reply back all of your comments! 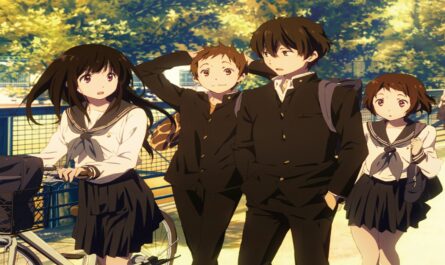