What is work? Why do you work? What does it even mean to work? With this theme as the axis, Kanna Kii’s first series of one-shot omnibus Mahou ga Tsukaenakutemo (Even if I can’t use magic) depicted the finest world of an unforgettable youth ensemble drama with a picturesque idyllic brushstrokes that a lot of you need to explore.

Animator Kishi-Kun, who says “I want to quit” 100 times, Chiyo-chan, who has a cool job but is sweet to live with, Tamaki, a gentle bandsman who is popular with women, and a girl who is fascinated by underground idols… and six other young people crawl through the days that may be beautiful memories someday-that pretty much it about the story.

How does that sound? Did I able to convince you for a second there? I guess not.

Even though the plot is nothing new, the story may not involve fantasy, fighting, heavy drama but trust me when I say this…a first impression of Mahou ga Tsukaenakutemo would make you say “Man, I felt that! I really felt that was the thing I wanted to do, that was me behind that page!”

People who have already read it you know what I am talking about. It’s really awesome how she able to blend the fictional slice of life tone with a magical vibration in just six pages where it almost felt like a coming of age Mirror where the glass of dreams coated with silvery hopes, confronting us there with our deepest fears, reflecting what would happen if it was set in real life perfectly.

Now here comes the spice of this series. The characters in this series make this show such a great manga. I don’t want to say anything else because I don’t wanna spoil the show for you all but I can say this – every characters in Mahou ga Tsukaenakutemo are depicted lively with a unique style of painting by Kanna Sensei, you will love it. She does not clearly state what she wants to convey, but many messages come from the conversations and facial expressions of the characters that give the story an extra bounce to love it even more.

What about the art?

There’s nothing spectacular about the art but the mangaka has that unique touch in creating the manga, if you like girls and like what Kanna Kii draws, you can enjoy it.

Came for the guitar, stayed for the characters.

You know what attracted me the most about this manga in the first place! It was the cover page of the series. I looked back on the cover and there was this boy holding a guitar with a girl by his side and that’s it. I was convinced. I’m a huge rock n roll fan. So that alone was enough for me to dive into the manga, but it was not like I was expecting something unique or special. Considering the fact that not a single user added the manga to their library in Myanimelist, I was just hoping for an average musical fantasy drama or something.

But I was completely wrong.

It’s by no means a masterpiece but stays reasonably an amazing one-shot manga.

Nowadays everywhere I go, people are tired of being tired, and many of those who are fortunate enough to have a job are working harder for less. At the cost of workers and especially young guys: young people who have hopes and dreams and aspirations for a future with security; who are trying to make ends meet on a daily basis to ensure that they and their families can live decently; cope with the majority of everyday situations with an unclear goal in the mind, and finally when they hit the 30 they just became literally tired. They become these young people who have no glittering dreams or hopes, just seek ways to interact with work somehow.

I know these words sound fancy but you know I was one of those young people too. I still am, but after going through those six pages I was relieved to feel that “I’m fine with this.” “Let’s do our best for the time being.” My heart, which was tired every day, became lighter.

It was hard to convince you that this is an amazing manga without spoiling it but I tried my best. What do you think? Do you feel like giving it a go? If yes leave a comment below.

And don’t forget to save this pin to your blogging board on pinterest. 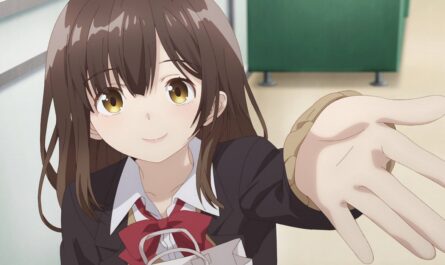