Musawo Tsumugi’s “Koi to Uso” (Love and Lies) will go on hiatus for the next few months to prepare the future story development. The series will from now on be branched in two different routes with two endings to ensure the highest readability for the readers, differing from the traditional manga light novel endings.
According to the author, this was already decided on 5 years ago.

Musawo launched the manga in DeNA’s MangaBox app in both English and Japanese in August 2014, and within a month, it attracted more than 3.5 million viewers, making it the Manga Box’s most popular work of all time.
Kodansha Comics is publishing the manga in English, and As of January 2021, 10 volumes have been released by Kodansha. They describe the manga:

Love is forbidden. When you turn 16, the government will assign your marriage partner.” This dystopian manga about teen love and defiance is a sexy, funny, and dramatic new hit! Yukari is dull. He doesn’t even stand out enough to be bullied—he’s just a generally lower-middle-class kid. He’s in love with Misaki, the most popular girl in school. There’s just one problem: He’s 15, one year away from receiving his government-assigned marriage partner. He normally wouldn’t have the courage to defy the law, but his sickly classmate Ririna still believes in love, and won’t stop goading him into confessing his feelings! 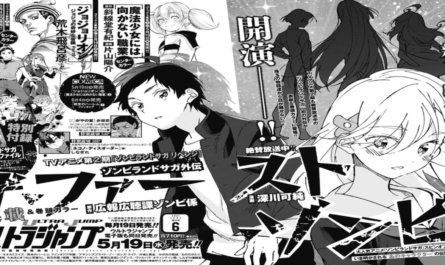