In addition to the tv anime announcement, congratulatory comments and illustrations have arrived from the original light novel author Rokujūyon Okazawa and the manga creator Rurekuchie!

“All the characters created by Okazawa sensei are energetic, full of humanity, and adorable, and I feel happy every day when I draw the characters of the dark soldiers as a manga manager!

It’s becoming a TV animation now, and Dariel and others move and talk and live their lives.

It’s all thanks to our readers. Thank you so much for loving me …!

Please look forward to it! !!”

Rokujūyon Okazawa launched the light novel in Shousetsuka ni Narou in November 2018 where it was published via online up to July 2020. From August 2019 Kodansha started publishing the print edition under their Kodansha Ranobe Bunko imprint and its manga adaptation by Rurekutye in Kodansha’s Young Magazine (later in Monthly Young Magazine). As of July 20, 2022, 7 volumes have been published which in total exceeded 1 million copies in circulation worldwide.

This slapstick action and comedy fantasy work centers on the dark soldier Dariel (30 years old) who cannot use magic. He serves as an assistant to one of the Dark Lord’s most trusted captains. But one day he was dismissed as an assistant to the four heavenly kings of the Demon King Army. In disappointment, he retires in a village of humans where his desperate second life has begun. 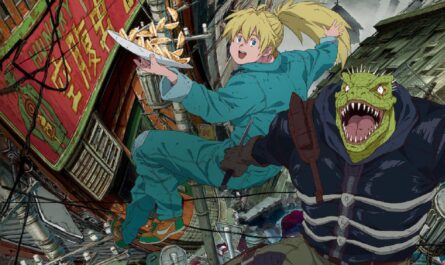